Philly police officers face off against sophomores from Parkway Center City Middle College at a tournament to raise awareness of gun violence in Philadelphia.  Kimberly Paynter/ WHYY
About 300 high school students gathered on Monday afternoon to watch as their classmates faced off with the police. Teen athletes put up their best basketball skills against teachers, faculty and PPD officers at a tournament hosted at the Community College of Philadelphia.For student Frank Gillis-Corbitt, who helped organize the cops vs. kids sports showdown as part of a class assignment, the day represented more than just a good time — or even a good grade.

“My cousin was gunned down a few years ago so this has directly impacted me,” Gillis-Corbitt told Billy Penn. “It puts a smile on my face to see all of these people coming around to support the event.” 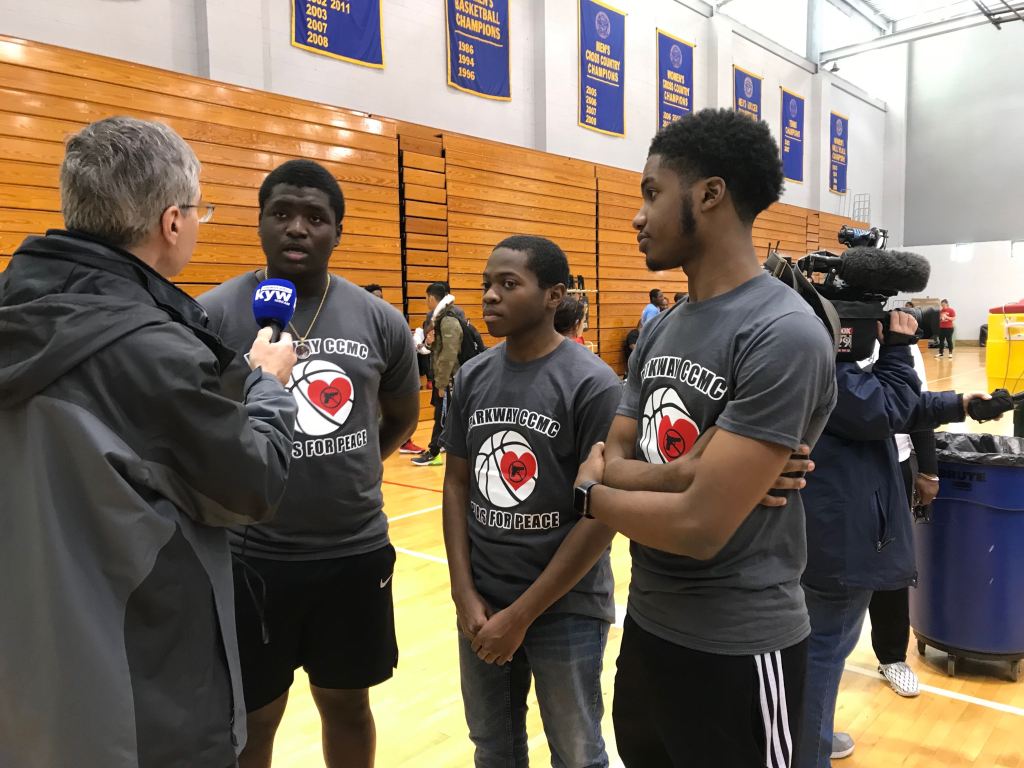 When their Sociology 101 teacher assigned a service learning project, Gillis-Corbitt and classmates Quadir Gamble and Jaden Burnett decided they wanted to do something really different. The Parkway Center City Middle College juniors came up with the idea to put on a tournament pitting students against cops on the hardwood.

With $1,570 raised in advance on GoFundMe and $258 more added from the $1 attendance charged at the door, the tournament knocked that first goal out of the park.

“It means that we have gotten through at least to some of the youth here, the ages of some of the moms’ children,” Harmon said. “It’s awesome that these young adults heard and listened to our pain.”

Playing through the pain, helping others to recover

High school students in unfurled wooden bleachers roared for their classmates as Parkway cheerleaders in burgundy, black and white stepped in rhythm to stylish “go-team” chants. Gillis-Corbitt, the tallest of the three organizers, was the only one to compete — he played in the 11th grade versus 9th grade face-off — while Burnett acted as playcaller for the five-game tournament cheerfully, with Gamble at his side.

Philadelphia has already seen more than 1,300 shootings so far in 2019. That’s more than a thousand victims, each with their own name, a unique face, diverse hobbies and special loved ones.

As of this writing, 103 of those shot in Philly this year were children under the age of 18. The youngest two victims were not yet a year old.

“It is evident that a great majority of us have experienced the pain and paranoia that gun violence has caused,” she said to a hushed auditorium. “We hear gun shots so often, that now it’s a part of the norm.”

Another memorable moment came when twins Julian and Julius Whitehead stepped to the mic. The 2010 Parkway graduates were born minutes apart — and nearly killed minutes apart on Independence Day last year. A bullet through the chest hit both of Julian’s lungs, he said, leaving him with a 7% chance of survival. He’s now a recent CCP graduate with a degree in respiratory therapy.

Moms Bonded by Grief will use the money from the benefit tournament to make many other children happy, said Shonda McClellan, at the organization’s first annual holiday party and toy drive.

McClellan lost her 17-year-old daughter Erica McClellan, a senior at John Bartram High School, right before the holidays in November 2017.

“We’re going to suck up our tears and just watch these kids smile, and have a good time, and hug the parents because we know,” McClellan said. “We know what they are experiencing. It’s an unspoken language to just give somebody a hug or look in a parent eye and just know how they’re feeling, because we feel that way as well.”

Gillis-Corbitt doesn’t want the cops vs. kids basketball tournament to be a one-off. With such an outstanding community response, the boys are hoping to make this an annual event.

“You know, my cousin would’ve loved this,” Gillis-Corbitt said. “He was a part of the community and he cared a lot, so for this to be surreal is just crazy.”

5 days ago The Notebook

6 days ago The Notebook

District pausing asbestos inspections to make sure they are effective

6 days ago The Notebook