The District agreed overhaul the way it assigns one-to-one aides as part of family's settlement.

Kathleen Connolly’s autistic daughter Olivia fled her elementary school without supervision in 2014. Olivia was found safe that day, but her mother used the potential tragedy to fight for systemic changes to special-ed in Philadelphia (Avi Wolfman-Arent/WHYY)

Kathleen Connolly tries not to think about March 7, 2014. But when she does, her mind drifts to Torresdale Avenue.

“I think about what happened there — what happened at Torresdale,” she said in a recent interview. “Only the drivers and Livvy know.”

Connolly’s daughter, Olivia, was eight years old on that chilly March afternoon. Some time around 1:30 p.m., Olivia — who has a form of autism that severely limits her ability to communicate or reason — bolted out the doors of Lawton Elementary.

The special education aide assigned to watch Olivia was only scheduled to work a half-day on March 7. It’s still unclear why. Connolly and her lawyers believe the School District of Philadelphia had been slashing hours for aides to save money during lean budget years.

After escaping, Olivia ran toward Torresdale Avenue, a busy thoroughfare about two blocks from her school in the Wissinoming section of Northeast Philadelphia.

Olivia, now 13, requires near-constant supervision. She would never cross a street like Torresdale Avenue alone. And yet on the afternoon of March 7, Olivia did.

“Did she stop at the corner, like she’s been taught to? Or did she just run across and the cars screeched to avoid hitting her? I’ll never know,” she said.

Olivia has a form of autism that makes her liable to wander off or “elope.” When you hear about stories like hers, it’s usually because they end in sorrow.

Just a few months before Olivia fled her school, police in New York City found the body of an autitistic boy named Avonte Oquendo along the shoreline of the East River. Avonte had also wandered off during the school day, but unlike Olivia, he never made it back home.

When Olivia decided to stop in that abandoned lot, she was, herself, a short walk from the frigid waters of the Delaware River. Had she wandered a little further, stayed in the cold a little longer, or crossed Torresdale Avenue at a slightly different time — who knows?

About an hour after Olivia’s escape, a passerby found the little girl nearly naked, wearing only a bright pink overcoat in sub-40-degree weather. That passerby called the cops. The police called Kathleen Connolly at her home, two blocks from the school. 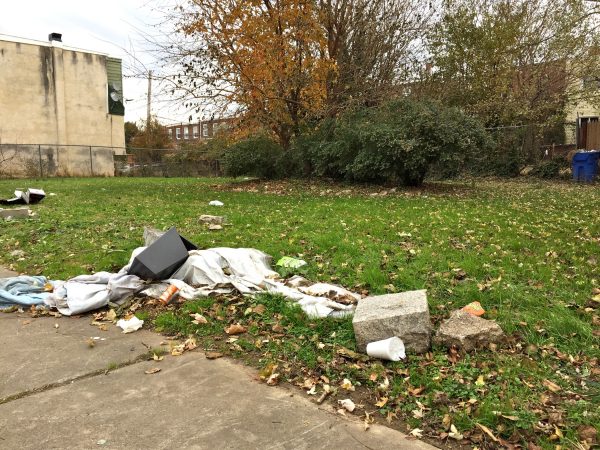 The empty lot in Northeast Philadelphia where Olivia was ultimately found by police on March 7, 2014. (Avi Wolfman-Arent/WHYY)

“I was here,” Connolly said, “oblivious that anything was going on — that my whole world was on the line down the street.”

Connolly was rattled and outraged, sure. But once she reunited with her daughter and started to calm down, another thought came to mind.

‘Children are going to benefit’

Olivia’s brush with death set off a five-year legal saga. And in the end, it prompted systemic changes designed to ensure nothing like this ever happens again in a Philadelphia public school. Improbably, it would become a story of triumph — not tragedy.

“In [Olivia’s] case, she doesn’t have a sad ending,” Connolly said. “The end of her story is thousands…of Philadelphia’s children [that] are going to benefit because of what happened.”

Connolly couldn’t see that big picture at first. She just wanted a way to get her daughters out of public school and into a private school focused exclusively on children with special needs.

“I was so happy that they messed up enough that I knew it was gonna open the door for that,” she said.

Connolly’s desperation was rooted, she says, in years of fear and frustration.

Olivia’s individualized special education plan called for her to have a one-to-one aide to follow her throughout the school day, in part because of the girl’s penchant to run away.

This type of aide is reserved for the neediest children. Some have physical disabilities that require constant help. Other students have severe emotional or behavioral problems. There are roughly 1,400 students across Philadelphia’s public schools that have these aides, according to the school district.

Connolly says that for two years leading up to March 2014, there had been long stretches where the district only paid for Olivia’s aide to work part time. In a lawsuit, Connolly’s lawyers alleged that the district had systematically curtailed or eliminated the working hours of these aides “in order to reduce costs.”

The district never admitted as much in court, although at the time there were widespread allegations of the school system failing to follow legally mandated special education plans due to severe budget cuts.

Connolly said she called the school repeatedly, warning them about the danger Olivia faced every time she was left alone.

Connolly and her husband, Sean McCann, have turned their house into a fortress. There’s a numbered keypad on the door to the kitchen so that Olivia — who has a fascination with fire — can’t get in there at night. Keys to the front and back door are kept in their own lockbox. Everything is oriented around Olivia’s safety, because Connolly has already learned the hard way how difficult it is to keep track of her daughter’s every move.

She needed the school to take similar precautions, and she felt they weren’t.

“I had been so vocal about the possibility that this would happen — the likelihood even,” Connoly said. “Eighty percent of the time [Olivia] doesn’t do anything. It’s just that 20% of the time, you don’t know when it’s gonna hit.”

Shortly after the runaway incident, the family won a settlement that compelled the district to pay for Olivia and her twin sister to attend a private school for students with special needs. Connolly had what she wanted.

The story could have ended there. Connolly and her husband could have simply moved on with their lives.

But on the day of settlement, Connolly recalls one of her attorneys, Michael Basch, sitting her down on a bench outside the public school and making one more pitch.

“He said, ‘You know, I’ve been looking for a case that would help me bring this issue to light,” Connolly recalled.

Basch felt that Olivia’s story — while extreme — was indicative of a deeper problem in Philly schools. Too often, he told Connolly, financial and bureaucratic hurdles prevented the district from promptly appointing one-to-one aides for the city’s most vulnerable school kids. Would the family consider further legal action to prompt broader, district-wide changes?

“I really, without hesitation, agreed,” Connolly said. “I couldn’t think of a more noble pursuit, to be honest, with my time.”

In January 2015, the family filed a complaint in federal court. That complaint triggered nearly five years of legal wrangling and negotiation.

This fall, it resulted in a second settlement.

The family received $55,000 to put in a trust for Olivia’s education and care. But Connolly is far prouder of the systemic changes embedded in the agreement.

As a result of Olivia’s case, the district overhauled the way it assigns one-to-one aides.

For starters, the process must be quicker. The district must find an aide within 10 days, and promptly notify the family if it can’t hire someone. During that 10-day hiring window, the school principal must assign another staff member to look after the child — something that could force principals to act with more urgency.

The settlement also tries to ensure that one-to-one aides are assigned without deference to financial concerns — or the wishes of central office school administrators. Under the new system, it’s clear that school-level officials are the ones who should help determine if a child needs one-to-one support. And those officials are being trained to make those decisions based exclusively on the child’s needs.

Although the district hasn’t admitted fault in Olivia’s case, Connolly and her lawyers sincerely credit Natalie Hess, the district’s director of special education, for working with them on changes that could help thousands of students. The district, they said, was willing to make big changes.

And of course none of it could have happened without Kathleen Connolly and her husband, Sean McCann. They went through five years of legal wrangling, much of it because they wanted some larger good to come from that day of rage and panic.

“Kathleen was adamant that she wanted to see the system change,” said Alan Yatvin, one of the attorneys who worked on the case. “She wanted to make sure no other parent went through this. And I think to have a client like that is a gift.”

For a while, Connolly could barely talk about what happened on March 7, 2014. Today, it’s a little easier. She’s been able to process some of the trauma and come to accept that she’ll never fill in the blanks of what happened.

But it’s a lot harder for her to talk about what this settlement means — big picture.

“When I think about all the kids who will no longer fall through the cracks, I get pretty emotional about that,” Connolly said, tears welling in her eyes, “about this having been used for the most noble of reasons.”

Somehow Kathleen Connolly’s little girl made it across Torresdale Avenue that day. She saved herself — and who knows how many others.

9 hours ago The Notebook

10 hours ago The Notebook

Modern, resource-rich classrooms, more academic direction — it is a new day for kindergarten

3 days ago The Notebook

Online learning resources you may have missed

A morning at Comegys: Food, homework, and a cloud of uncertainty

A daily roundup of education news